Awaji Island (淡路島 Awaji-shima) is an island in Hyōgo Prefecture, Japan, in the eastern part of the Seto Inland Sea between the islands of Honshū and Shikoku. The island has an area of 592.17 square kilometres (228.64 square miles), and is the largest of the Inland Sea's islands.

As a transit between those two islands, Awaji originally means "the road to Awa", the historic province bordering the Shikoku side of the Naruto Strait, now part of Tokushima Prefecture. 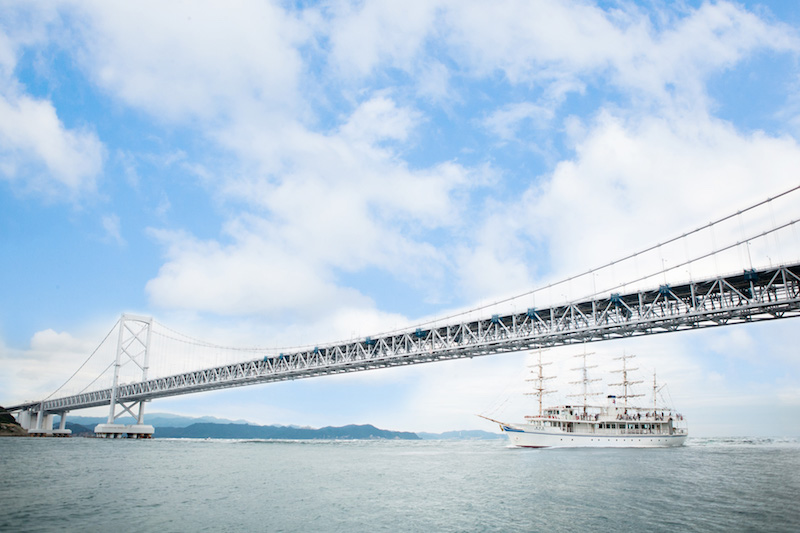 The Akashi Kaikyō Bridge (明石海峡大橋 Akashi Kaikyō Ōhashi) is a suspension bridge, which links the city of Kobe on the Japanese mainland of Honshu to Iwaya on Awaji Island. It crosses the busy Akashi Strait (Akashi Kaikyō in Japanese) as part of the Honshu–Shikoku Highway. It was completed in 1998, and has the longest central span of any suspension bridge in the world, at 1,991 metres (6,532 ft; 1.237 mi). It is one of the key links of the Honshū–Shikoku Bridge Project, which created three routes across the Inland Sea. 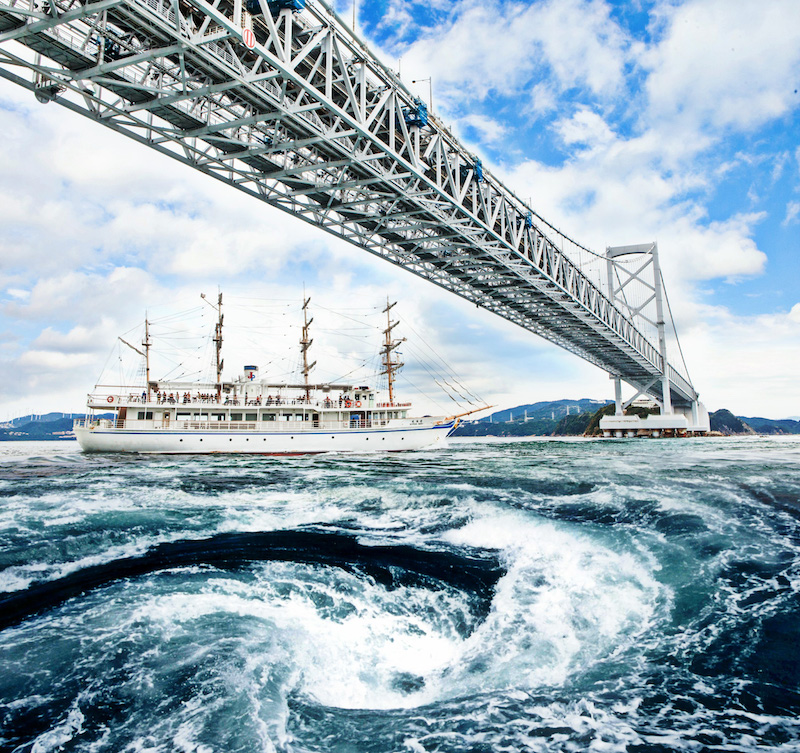 The Naruto whirlpools (鳴門の渦潮 Naruto no Uzushio) are tidal whirlpools in the Naruto Strait, a channel between Naruto in Tokushima and Awaji Island in Hyōgo, Japan. The strait between Naruto and Awaji island has a width of about 1.3 km (0.81 miles). The strait is one of the connections between the Pacific Ocean and the Inland Sea, a body of water separating Honshū and Shikoku, two of the main islands of Japan. The tide moves large amounts of water into the Inland Sea twice per day and also removes large amounts of water twice a day. With a range of up to 1.7 m (5.6 ft), the tide creates a difference in the water level of up to 1.5 m (4 ft 11 in) between the Inland Sea and the Pacific. Due to the narrowness of the strait, the water rushes through the Naruto channel at a speed of about 13–15 km/h (8–9 mph) four times a day, twice flowing in and twice flowing out. During a spring tide, the speed of the water may reach 20 km/h (12 mph), creating vortices up to 20 m (66 ft) in diameter. 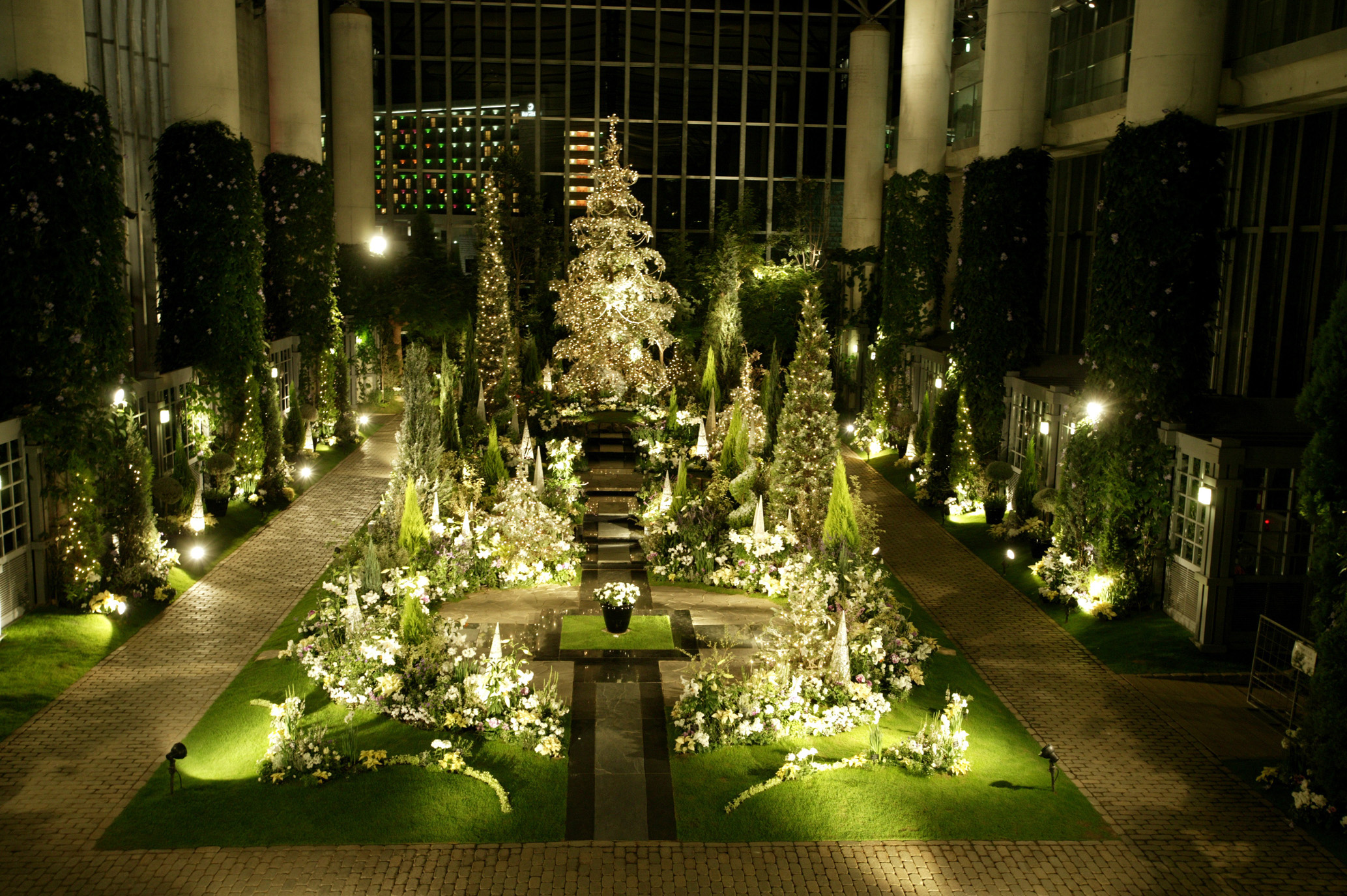 Kiseki no Hoshi Botanical Museum provides opportunities to observe the creation of the nature, and to learn about and appreciate the beauty and the wonder of nature. 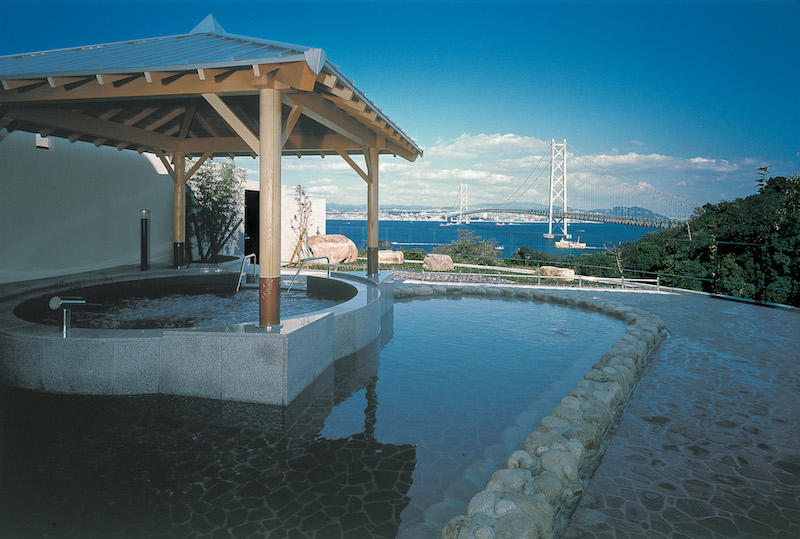 Izanagi Shrine (Izanagi Jingu, 伊弉諾神宮) is a Shinto shrine located in Awaji, Hyōgo Prefecture, Japan. It is dedicated to the kami Izanagi and Izanami. It was formerly an Imperial shrine of the first rank (官幣大社, Kanpei-taisha) under the Modern system of ranked Shinto Shrines. It was the ichinomiya of Awaji province.

The Kinki Region, also commonly known as Kansai encompasses the Kinki Plain and consists of seven prefectures. It used to be the political and cultural center of Japan for many centuries and includes the cities of Kyoto, Osaka, Nara and Kobe. 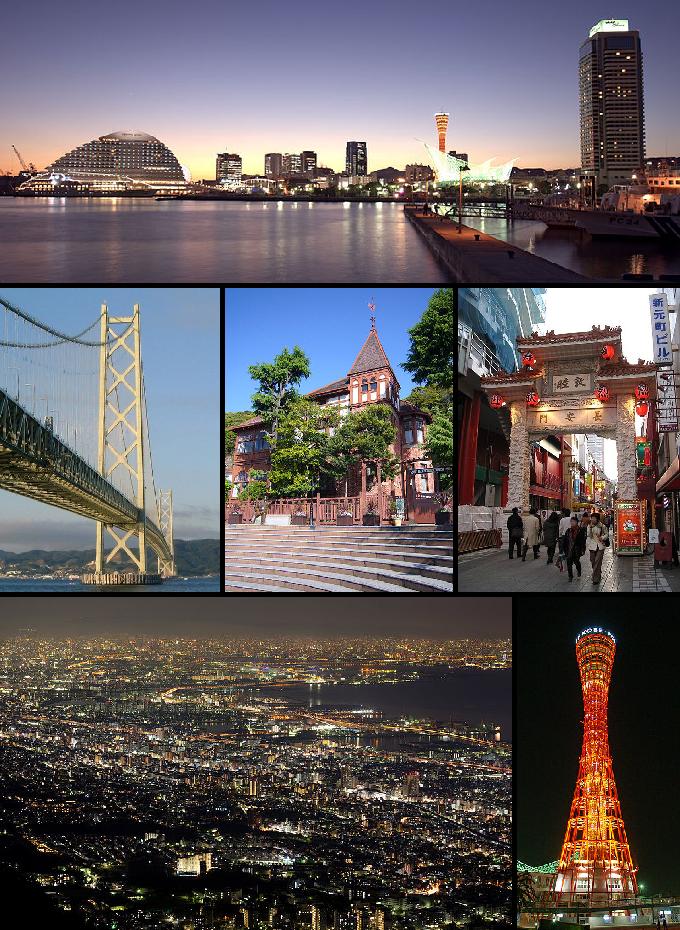 Kobe (神戸市 Kōbe-shi, Japanese: [koːꜜbe]) is the sixth-largest city in Japan and the capital city of Hyōgo Prefecture. It is located on the southern side of the main island of Honshū, on the north shore of Osaka Bay and about 30 km (19 mi) west of Osaka. With a population around 1.5 million, the city is part of the Keihanshin metropolitan area along with Osaka and Kyoto. 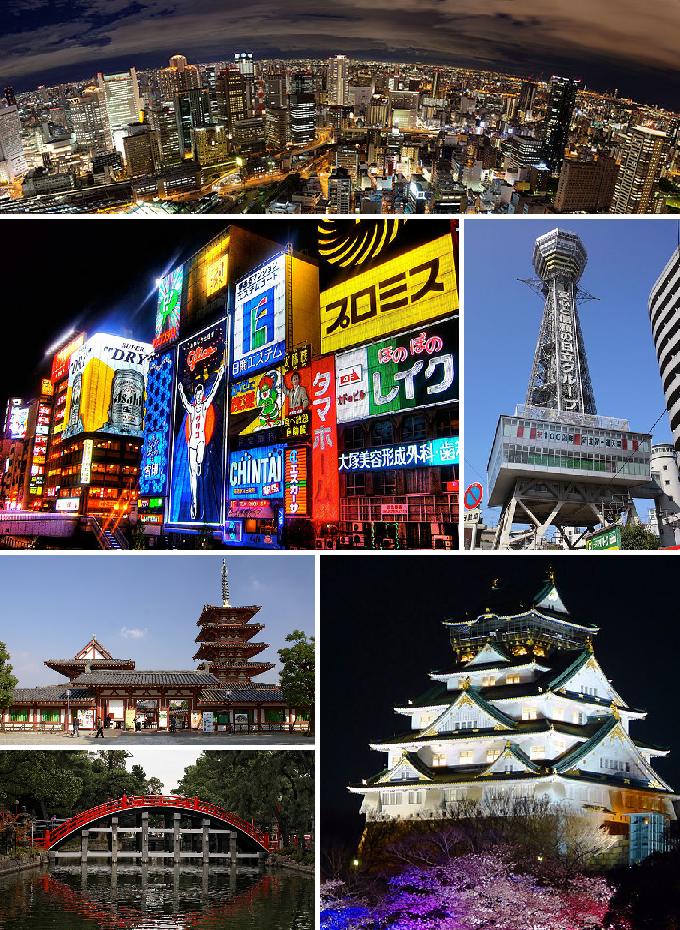 Osaka (大阪市 Ōsaka-shi) (Japanese pronunciation: [oːsaka]; ) is a designated city in the Kansai region of Japan. It is the capital city of Osaka Prefecture and the largest component of the Keihanshin Metropolitan Area, the second largest metropolitan area in Japan and among the largest in the world with over 19 million inhabitants. Situated at the mouth of the Yodo River on Osaka Bay, Osaka is the second largest city in Japan by daytime population after Tokyo's 23 wards and the third largest city by nighttime population after Tokyo's 23 wards and Yokohama, serving as a major economic hub for the country.

Kyoto (京都市 Kyōto-shi, pronounced [kʲoːꜜto]), literally meaning "Capital City", is the capital city of Kyoto Prefecture, located in the Kansai region of Japan. It is most well known in Japanese history for being the former Imperial capital of Japan for more than one thousand years, as well as a major part of the Kyoto-Osaka-Kobe metropolitan area. 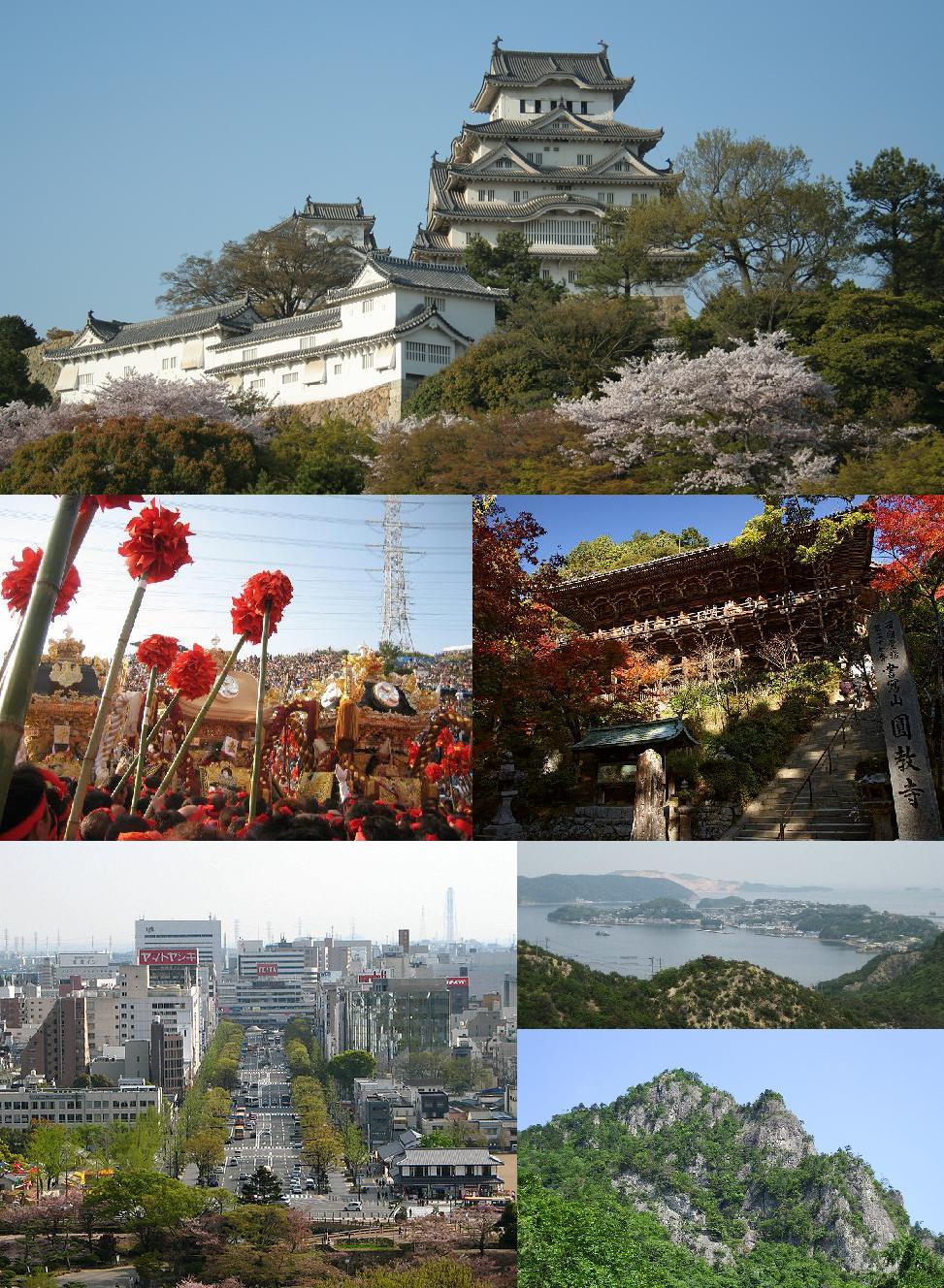 Himeji (姫路市 Himeji-shi) is a city located in Hyōgo Prefecture in the Kansai region of Japan. Originally a castle town, Himeji is home to the Himeji Castle, a UNESCO World Heritage Site. For over 400 years, Himeji Castle has remained intact, even throughout the extensive bombing of Himeji in World War II and natural disasters such as the 1995 Great Hanshin earthquake and various typhoons. Other attractions include the Engyō-ji temple, Mount Seppiko, Himeji Central Park (a safari park), the Himeji City Tegarayama Botanical Garden in Tegarayama Central Park and the Koko-en Garden.